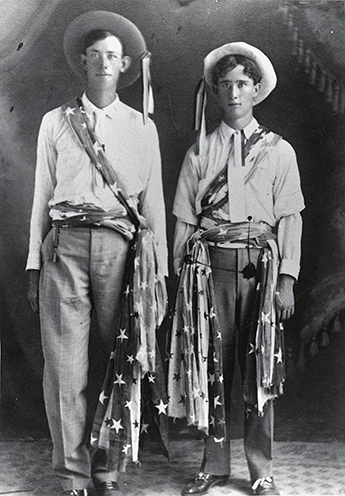 Tempean’s Merton W. Stewart (left) and Rex Anderson (right) are dressed in patriotic bunting for possibly for the Fourth of July in this late 19th century undated photo.
Courtesy of Tempe History Museum.

Ever since 1777 a year after the Declaration of Independence was ratified by the Continental Congress the Fourth of July has been celebrated all across America.
Including of course Tempe.

In fact the Fourth of July celebration at Beach Park with the SRP spectacular Fireworks Show has become the Valley’s most popular holiday event. It is built on a long tradition.

“Tempe does nothing by halves, but everything commensurate with the push and vim which is characteristic of her citizens, and from the preparations now being made the celebration of our national holiday promises to be one of the grandest and most elaborate that has ever been witnessed in the territory.”

That declaration wasn’t made in regard to this year’s festivities. It was the words of an effusive town booster writing in the Fourth of July program in 1888!

The boast continued: “Her liberal and progressive citizens have gone into it whole heart and soul, displaying their usual zeal and determination which cannot but insure success; sparing neither time, labor or money for the entertainment and comfort of her guests.”

Following the event, the Tempe Daily News reported on July 7, 1888, the “…Fourth of July was a grand and most glorious success. The elaborate and attractive programme caught the multitude, for never before has the Salt River Valley witnessed such a concourse of people assembled together to participate and enjoy the celebration of our national independence.

“Everything had a galaday experience, everybody (had) on their holiday attire, houses were bedecked and covered with emblems of freedom … and nothing seemed to stand in the way of its complete success.

“Even old Sol, who seems to hold such proverbial spite against this particular day, arose propitiously and hardly had he proclaimed a beautiful day when people from every corner of the valley came pouring in by the hundreds, in carriages, wagons, on horseback and foot …(becoming) so vast that people stood in amazement and wondered where all the people came from.

“Everybody seemed full of patriotism and bent on getting all possible enjoyment out of the festivities of the day.

A “…special train from Phoenix (brought) some five or six hundred more visitors. (Arriving) at the depot about 10:30 a.m. (they) were escorted by a brass band and the local order of the Patriotic Order of the Sons of America to the large arbor which had been erected for the occasion.”

At I:00pm after the customary speechmaking, patriotic songs and a “juicy” barbecue there ensued what was probably the most bizarre Fourth of July “entertainment” in Tempe history.

“The warahoop was heard and the grand sham battle between the Pimas and the Apaches commenced ─ …(a) novel scene…watched with intense interest by most of the spectators as something they had never seen before and probably never would again.

“About 100 or more Pima on horseback charged up the butte at full speed to avail the band of warriors impersonating the Apache who were secreted among the rocks.

“The battle then became general and almost realistic, the Indians fighting in their true characteristic style.

“Charge after charge was made and repulsed by the contending parties until the ‘Apaches’ who were greatly outnumbered were dislodged when a hand to hand combat took place ─ the wiry Apache often dismounting the foe.

“The fight still continued on foot and after a desperate struggle the wilt ‘Apache’ was conquered.

“After the sham battle came the squaw race, the sack race, horse racing and other sports…”

Tempe’s peculiar celebration culminated in an evening of “a most imposing and beautiful display of fireworks…from the butte ─ and with the grand ball which was heartily participated in by all closed one of the most successful Fourth of July celebrations ever held in Arizona.”

The more things change the more they stay the same.